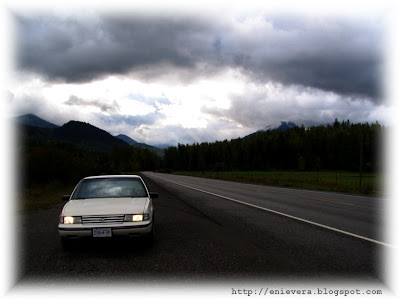 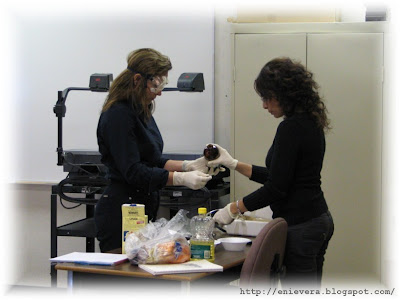 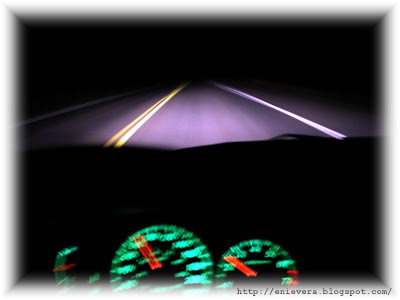 September 25, 2008 - After class today, I had gone to Cranbrook. At night, one must watch out for the Elk, or the Deer or the Moose thats crossing the highway. At Canadian highway speeds of 100 - 110 Km/hour it's easy that an accident with one of these could turn fatal. So one must watch out. Be very careful. 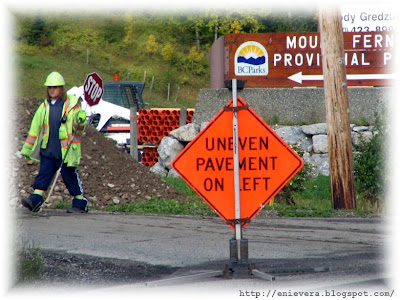 September 26, 2008 - Friday - The Road construction between Elko and Fernie. 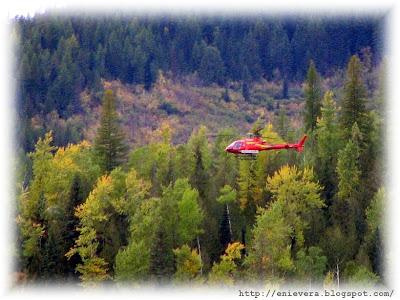 September 26, 2008 - Some helicopter in Fernie, as I was walking around town for exercise after class. 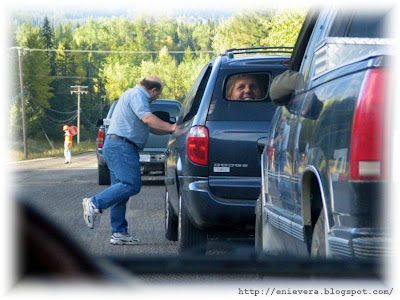 September 27, 2008 - Traffic jam. The road is being re-paved. It's not so bad. I actually like the line-ups because I can get out of the car and appreciate my surroundings. things I normally won;t be able to do. Plus the weather is nice too. It's good to not be in a rush to get somewhere when this happens. 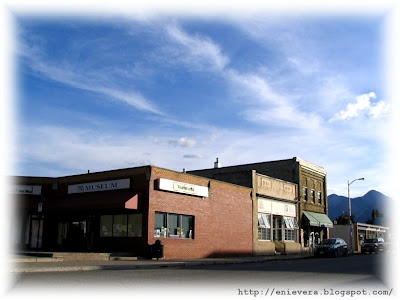 Ladies and Gentlemen, Let me present to you "The Fernie Museum". If you ever find yourself in Fernie, British Columbia, Canada, do drop by this humble but very pleasing museum. I had met one of the staff in charge Mr. Nick Juliano. He is a very good person and very friendly. 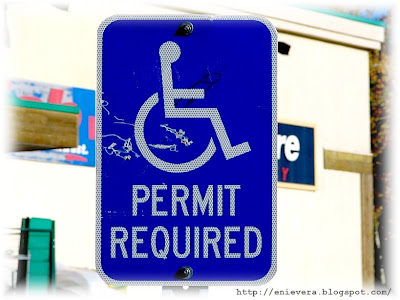 Look closely. I found something was wrong with this sign. Ron pointed it out to me one afternoon while Frank and I were waiting for him to come out from the grocery store. Do you see it? I presume some kids undergoing puberty have done it. hahaha. 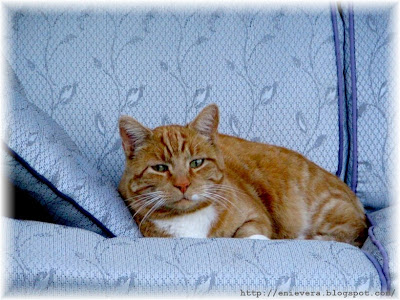 We have now decided to call her "Blondie" (I think she may not like it. She's a lesbian I think) . She might want something more Masculine like "Brad" or "Goliath" or something like that because it's more appropriate with her personality. Seriously. I love this cat! It acts very strong and independent. very confident and smart! 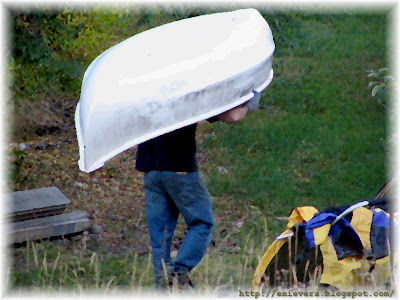 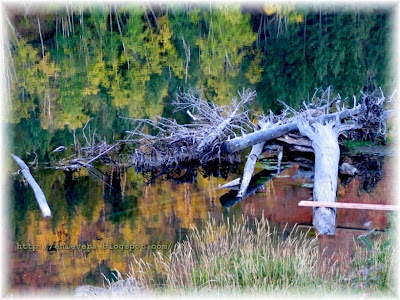 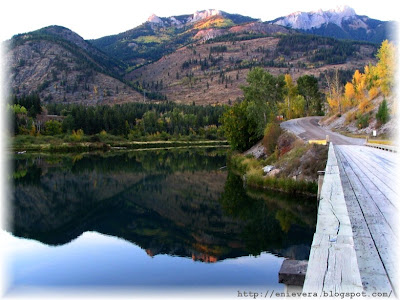 September 28, 2008 - Sunday . Ron and I had gone to our usual walk in the neighborhood pass the old bridge and up the back roads. Here is a snap shop from that walk. 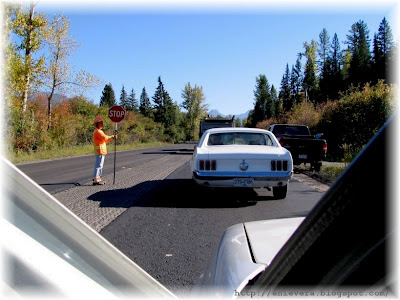 A most unexpected thing happened to me today - September 29, 2008. On a monday afternoon after being school the whole day, I was looking forward to coming home taking a short nap , and going out for a walk with Ron. The highway towards home was being paved. The flag lady stopped all outbound vehicles from Fernie (which included myself). I was fine fine with this, and rather the exhaust be doing it's thing, I decided to turn the engine off (big mistake). About 20 minutes later, the flag lady gave the "go" signal. I got in my car, cranked the engine, and a most unpleasant experience started to unfold. My car would not start. It wouldn't go! I tried many more times and still it would not budge! . All the windows in my car were closed. The sun was directly on me, and my sweat started to build up. I thought "oh my gosh, It's not going to start!" . Meanwhile, all the 40 cars behind me decided they won't have anything to do with this so, they all started passing me by - meanwhile every passenger (or passengers) on every vehicle was looking at me - It doesn't take a genius to figure out what on earth is going on. I saw all sorts of expression one had a smirk, one had a smile, one was close to laughing and pointing at my misfortune... oh it was embarrassing. I had called Ron and told him about this. I had then called for a towing service and then called for a car shop that could fix my car! I was drenched in sweat! ha aha hah! Just my luck huh? 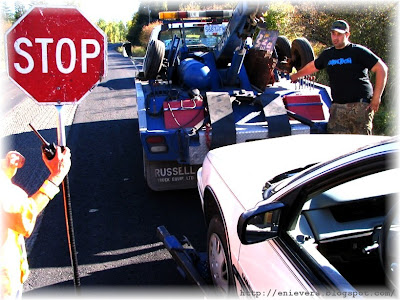 The God-sent tow truck man (his name is Jordan) came about less than half an hour later and rescued my poor car! The Mechanic looked at it and said it's probably not that serious. Maybe a few adjustments here and there and maybe replacing a sensor or two. I hope the bill won;t cost as much as the car! I think I will know by Wednesday what's wrong with it. Ron came to pick me up in Fernie, and he suggested we have some "rice". He knows rice makes me happy. hahaha. 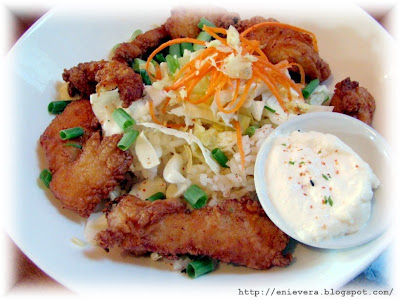 Comfort Food - "Ka-ra-gei" at the Curry Bowl Restaurant in Fernie, BC, Canada. After all that stress, This is what i needed. Oh , I felt so much better after that. hahaha! 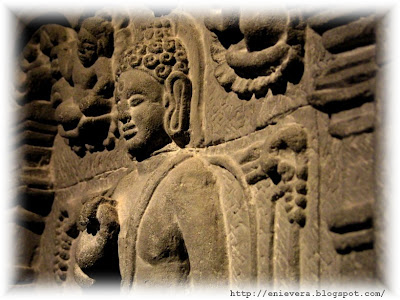 This was a wall decor at the Curry Bowl. I thought it was too beautiful not to share.
at September 29, 2008
Email ThisBlogThis!Share to TwitterShare to FacebookShare to Pinterest
Labels: 2008, Elko, Fall Season, Fernie